The Christmas Holidays have come upon us and that provides a little downtime to facilitate some thinking about new things.  This holiday I have been considering the implications of how bring your own device could ever work.  Of course this really means that I’ve been investigating the killer hardware and software which would allow this to work. New and favourite pieces of hardware include the new line of products from HP. 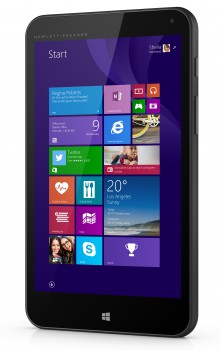 The key thing with all of these devices is their low price point. I am writing this post on a HP Stream 7 signature edition which I bought from the Microsoft store at the sale price of £79 with free postage.  It’s terrific!  I have thoroughly enjoyed using it and as an avid fan of all things Apple I have been quite happy to put my other toys aside in favour of this budget device.  As a possible tool for pupils at school this little device can pack a punch and runs Microsoft Office (bundled for a year) with ease. When you consider the ability for Scottish Schools to use windows based devices like this with the national O365 SharePoint tenancy in GLOW then these little devices have the potential to change productivity in the classroom.  They also have a fairly parent friendly price compared to Apple devices whilst still allowing access to industry standard applications.

The only downsides which I have discovered are the battery life, as whilst I get a fair few hours from the device it’s not an all day battery, and the cameras are pretty poor. But what do you expect for this price?  These haven’t affected the usability of the device for most purposes.

Next, you need the killer apps… My research took me to a variety of applications including OneNote coupled with ClassCreator.  However, that is worthy of it’s own post and will come next.

This article focuses on the HP Stream devices.  Other PC, Apple, ChromeOS and Android devices will also work with GLOW.

At least three years ago, everybody seemed to be learning to blog. There were a multitude of people blogging via blogger, wordpress and other platforms and I felt it was

Having spent almost two and a half years On this project it was a great sense of achievement to finally have some pupils using the blog server. It also, was

The problems you face when it comes to implementing a project like this are wide and varied. This is a proper computing project when the issues are many and rely